Variable Costs and Emissions from Mining Bitcoin in the Western Interconnection

This white paper outlines the results of the first known study to calculate the wholesale costs and emissions associated with mining Bitcoin by leveraging industry-standard power grid modeling software. The study simulated the hourly operations of the bulk electric power grid for the Western Interconnection1 (WECC) in 2026 to assess the impacts of 100 MW mining facilities operating in select regions.
Both costs and emissions from Bitcoin mining are highly dependent on the geographic region of interest. The author modeled two separate scenarios to examine the potential of Bitcoin mining to serve as an effective demand response resource for grid operators. In the reference case, the mining facilities are modeled as a baseload demand, operating around the clock independent of prices. In the alternative case, the model treats the mining facilities as price-responsive load centers that cease hashing activity whenever the electricity costs exceed the expected revenue for that hour. With baseload mining operation, the forecasted market prices ranged from 17-30 $/MWh and CO2 emission intensities varied from 15-1,280 lbs of CO2/MWh. With price- responsive mining operation, an owner of a mining facility can reduce the average realized price for electricity up to 25% by agreeing to curtail operations during periods of elevated net demand on the grid. This flexible mode of operation also results in a slight improvement in the CO2 emission intensities for most regions.
This study addresses only the variable revenue and costs related to Bitcoin mining and excludes any capital investments required to begin mining operations. Nonetheless, it still provides key stakeholders in the Bitcoin community an illustration of an analytical framework that offers an improved understanding of the costs and opportunities from mining Bitcoin, both now and in the future.

The author utilized Energy Exemplar’s Plexos – an industry-standard grid modeling software program – to conduct an 8,760 deterministic production cost modeling study. This study used the latest 2026_2030 WECC dataset posted by the California Independent System Operator (CAISO) to estimate hourly electricity prices and CO2 emissions associated with proof-of-work (POW) mining for the Bitcoin network for select regions throughout the Western Interconnection2. Comprised of BitMain’s S19 Antminers and the associated HVAC requirements, each mining facility is modeled as a 100 MW point of interconnection. Given the relatively large power draw (100 MWs can power ~65,000 homes), the study assumes each mining facility can purchase electricity at wholesale rates, either directly by participating in an ISO or indirectly by partnering with its local load serving entity.
The author ran two separate studies in Plexos to examine the tradeoffs for a mining facility owner if it were to participate in a demand response program. In Scenario I: Baseload Operation, the model assumes the mining facility is insensitive to wholesale electricity costs and operates around the clock – 24/7/365. In Scenario II: Flexible Load Operation, the mining rigs only operate when the marginal revenue from mining is greater than the marginal cost of production. The hourly breakeven electricity price defined in the model is 35 $/MWh. Please refer to the appendix for a list of the key assumptions and calculations used to determine this price.

Using the assumptions in the CAISO WECC dataset, Plexos generated relatively modest hourly wholesale prices in 2026 and a large range in CO2 emission intensities across the WECC regions3. Figure 1 summarizes the costs and emissions data from Scenario 1. On the left, the annual average locational marginal price (LMP) for each region is listed in $/MWh. And on the right, two related metrics for CO2 emissions are displayed. The first number reports the annual CO2 emissions from each 100 MW mining facility in units of thousands of metric tons (kMT). The second number in parentheses reports the regional CO2 emission intensity in units of lb/MWh. As shown in Figure 1, costs and emission intensities aren’t always correlated. In regions such as the Pacific Northwest and British Columbia, the supply of electricity is relatively affordable and has a low carbon intensity. Compare that to WECC’s mountain regions, where electricity is similarly affordable but comes with higher CO2 emission intensities. Conversely, California’s electricity supply has a relatively low CO2 intensity but the highest costs among all WECC regions. Keep in mind that these wholesale market prices only reflect generation related expenses and do not include other charges, such as transmission and distribution costs, that are typically included in retail rates. The study also excludes any distribution network upgrade (DNU) charges that may be necessary for the mining facility to secure its interconnection with the grid. 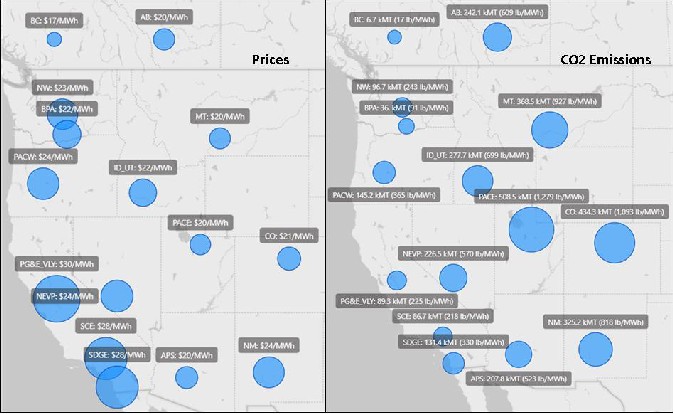 When the Plexos model incorporates price-sensitive mining operations, miners can benefit from material reductions in electricity costs in high price regions and also enable slight improvements to the regional emission intensities for most territories. Similar to above, Figure 2 displays the key results from Scenario II: Flexible Load Operation. However, each mining facility’s load factor4, which is an indication of the percentage of time the facility is operating, is now included in parentheses alongside the LMPs. Relative to the baseload scenario, price- responsive mining has its greatest effect in California, both in terms of costs and emission intensities. One explanation for this finding is that there is a large supply of solar energy in the middle of the day, which helps to suppress prices in the wholesale market, but still a substantive amount of natural gas-fired generation during the night and early morning hours. 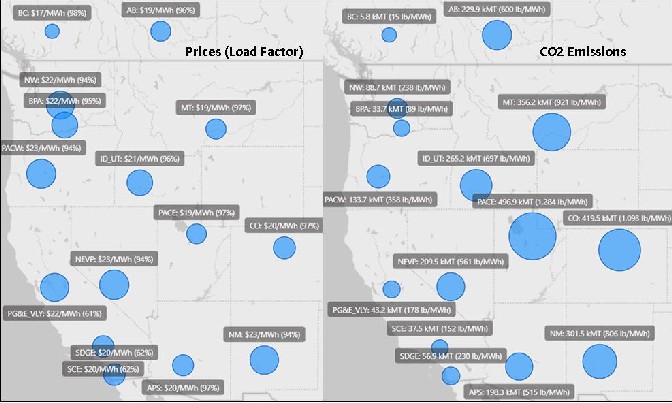 Based on the modeling results from Scenario I, a straightforward breakeven economic analysis shows that positive profit contribution opportunities exist in most WECC regions5. For facilities that are able and willing to adjust their power demands based on pricing signals, Scenario II shows profitable mining is possible even in expensive regions. With a growing penetration of renewable energy, wholesale prices are likely to exhibit greater volatility as grid operators use pricing signals to help manage the grid. Scenario II also provides a preliminary indication of how a flexible mining load can serve as a valuable balancing resource for grid operators. Figure 3 below displays the month-hour averages for load and realized price from a price-responsive mining facility located in the Pacific Gas and Electric – Valley (PG&E_VLY) region. In this configuration, when the
hourly price of electricity exceeds the aforementioned calculated breakeven price (35 $/MWh), the facility stops
mining. In exchange for serving as a grid balancing resource, the mining facility is able to reduce its electricity costs by over 25%. Even with a load factor as low as 61%, there are still extended periods of time when profitable mining opportunities exist. In the future, it will behoove miners to consider implementing an fixed O&M charges are excluded for the time being. 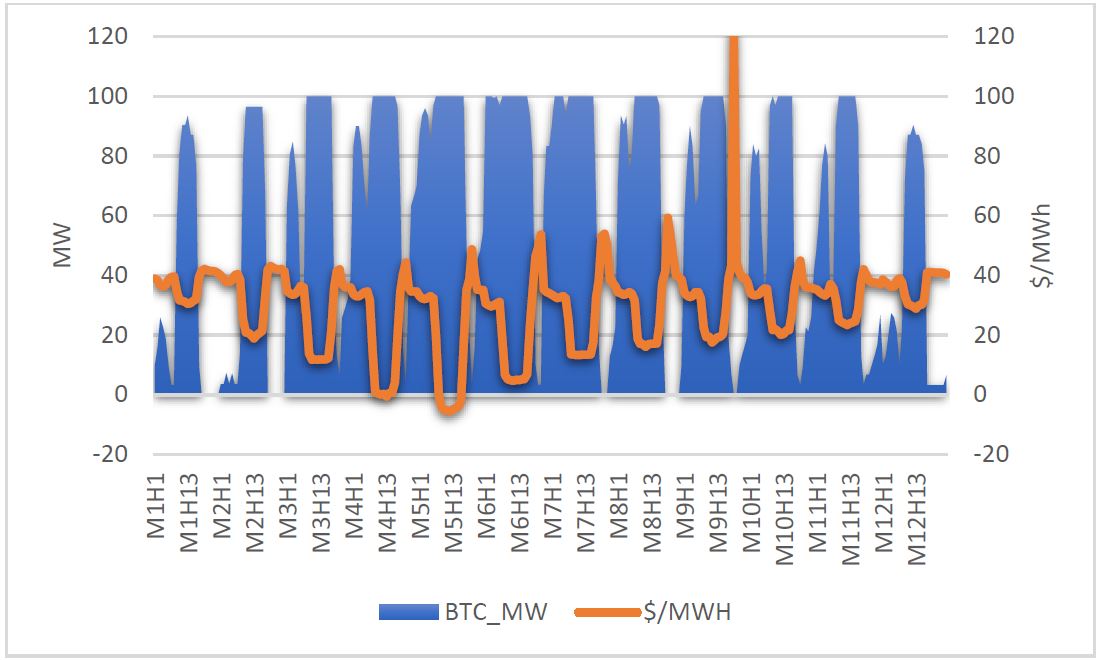 Figure 3: Month-Hour Averages for Demand and Realized Price for a Price-Responsive Miner in the PG&E Valley Region

operational strategy such as this to secure low-priced electricity and remain profitable, especially as the difficulty of the Bitcoin mining network increases and the block award is scheduled to halve sometime around May 20246.

Calculating the emissions footprint for Bitcoin mining in any geographic region is a complicated endeavor because it is a function of multiple variables. To effectively deal with that complexity, this study leveraged the inherent capabilities of a fundamental grid simulation model to calculate the hourly emissions associated with mining operations for multiple regions in WECC. This approach allows the author to account for the large variation in WECC’s generation supply portfolio as well as the operational decisions that are necessary to balance the supply and demand for electricity on an hourly basis. Any study that relies solely on annual emission averages can easily over or underestimate the actual emissions associated with Bitcoin mining (especially if mining begins to deviate from a baseload operating profile) because they exclude these hourly commitment and dispatching decisions.
While the primary focus of current and prospective mining operations is on capital expenditures and electricity costs, in the future, the emissions from Bitcoin mining may exert greater influence on investment and operational decisions due to a growing awareness of its overall carbon footprint. As shown in Figures 1 and 2, mining-related emissions is largely dependent on location and can vary significantly. For example, the 96.7kMT of CO2 emissions generated by the baseload mining facility in the Northwest (NW) region is equivalent to ~21,000 additional cars on the road for an entire year, according to an EPA emissions calculator7. Comparatively, that same baseload facility located in the PacifiCorp – Wyoming (PACE) region is the equivalent of ~110,000 additional passenger vehicles. The relationship between prices and emissions is likely to warrant additional attention from investors in large-scale mining operations for two separate reasons. First, public and private stakeholders are becoming increasingly more focused on ESG-related matters. And second, the penetration of renewable energy continues to increase in WECC and other geographic regions.

This deterministic study assumes a constant price of $40k for Bitcoin in 2026. In addition, the Plexos model uses a single fuel price forecast for natural gas and coal in each region. These inputs are not meant to serve as indicative prices in 2026. Rather, they are part of an analytical framework that can support future sensitivity studies exploring multiple pricing scenarios.

Below is a sample of ideas on how this preliminary study can be expanded to conduct more detailed assessments of the costs and opportunities associated with Bitcoin mining operations in the Western Interconnection.

1 The Western Interconnection is one of the three main AC interconnections in the United States. For more information, please refer to the primer at energy.gov or WECC’s website.

2 Please see the appendix for a list of selected regions.

3 The average annual price for natural gas and coal assumed in the WECC dataset is $3/MMBTU and $1.40/MMBTU, respectively.

5 In this preliminary study, the author only addresses variable costs and revenues. Capital expenditures and any applicable

6 At this time, the block award will be reduced from 6.25 BTC to 3.125 BTC. Bitcoin halving events are scheduled to occur approximately every 4 years until 2140, which is when the last of the 21 million Bitcoins will be mined.

Calculations:
The chart below illustrates the forecasted difficulty assumed between now and 2026 using the assumptions above. For the study, the author averaged the monthly difficulty values in 2026 to calculate an annual difficulty of 76.3T. 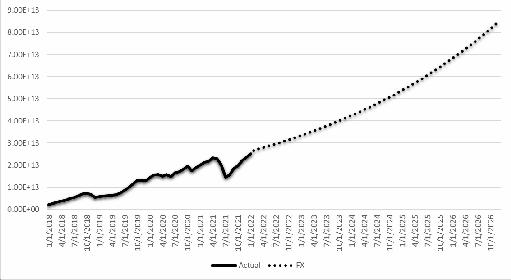 About the Author: Jim Himelic